Beauty, beauty. Look at you. God, I wish I had it too.

Now, if you didn’t read this line with a Baltimorean accent while looking at this picture (and laughing hysterically), you don’t know what I’m talking about.

I’m talking about John Waters, the radical filmmaker and free spirit who turned bad taste into a celebrated art form, and whose legions of fans are among the most inspired, liberated and unusual individuals on the planet (just check out the Dreamland Web site).

I first became aware of Waters in my college days, of course. I was in charge of the film program back then, and I booked 16mm prints from a nontheatrical distribution company called Films Incorporated. In its catalogue was a subcategory of adult-themed titles from a distributor called Saliva Films, whose logo was a lolling, pink and very wet tongue. One of Saliva’s products was Pink Flamingos, featuring that now-iconic shot of Divine in the skin-tight red dress brandishing the handgun.

I was intrigued. Still, I thought, “My God! Can I show that movie in my school auditorium — in South Bend?” I opted for films like Andy Warhol’s Bad, Ralph Bakshi’s Wizards and Dario Argento’s Suspiria, resisting the entreaties of the other members of the student council to “Get Rocky Horror! Get Rocky Horror!” How jejune. Plus, it was still red hot and a one-day rental was in the thousands when I only had hundreds to work with..

I finally saw Pink Flamingos in 1980 at the Nuart Theater in Los Angeles. I was shocked — not at the perversion on display, but at the audience’s enthusiastic reaction to said perversion. What a bunch of happy freaks! Nevertheless, I knew I’d found a filmmaker who truly spoke to me. After that, I rushed to the revival theaters to catch John Waters films anytime they were playing. And as the home video revolution got into full swing, I was able to enjoy still more of his incredible work, including Multiple Maniacs, Desperate Living, and my favorite, Female Trouble.

Female Trouble is in my opinion the best-structured and most hilarious of Waters’ early films. It’s jam-packed with quotable lines:

“We rarely eat any form of noodle, but I’ll take a small portion just to be polite — with cheese.”

“I got something for your face — mother fucker!”

And of course Divine, as Dawn Davenport, evolves from juvenile delinquent to unwed mother to criminal to full-on murderer in the name of beauty, shooting up eyeliner. It just doesn’t get any better than that. Oh — and she gets raped by her male alter ego.

Later came Serial Mom, which features a wonderfully game Kathleen Turner as the titular character who kills her neighbors for breaches of etiquette and Sam Waterston as her understandably confused husband. The obscene phone call she makes to Dottie Hinkle (Mink Stole) is an all-time watermark in cinematic hilarity and should be included by law in all those television clip shows saluting comedy throughout history — complete and unedited. Screw those tired old Jackie Gleason routines.

When I went to New York for the first time, John Waters’ Pecker (he named it that way so it would appear in print ads like that) had just opened, so of course I had to go see it immediately. Coincidentally, it’s the only Waters film in which characters actually leave Baltimore and travel to the Big Apple, so even though I was actually there, my first glimpses of Manhattan were in a theater on Broadway watching a John Waters movie. Isn’t that fitting?

In 1997, a friend of mine who ran [update: now owns] a postproduction facility alerted me that Waters would be working in one of their dubbing studios, preparing a new stereo track for the 25th anniversary release of Pink Flamingos. Of course I had to meet him. He was remastering the music and replacing some of the songs due to rights problems.

As some of you may know, he built the original soundtrack with 45 rpm records from his own collection, running the original 16mm print through the projector again and again until he got it just right. Just think…one of those trips through the projector could have destroyed the film and deprived the world forever of one of its true masterpieces. I shudder at the thought. 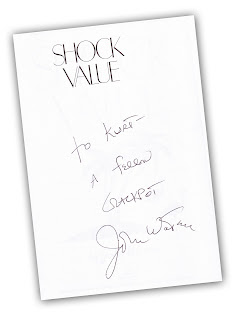 With the new technology available, he was cleaning up the image and adding a spacial soundtrack for the anniversary edition. When I arrived with a copy of “Shock Value” for him to sign and a Polaroid camera, he was very gracious and forthcoming, signing the book and posing for a photo.

He even allowed me to stay in the studio while he worked, offering anecdotes about the making of the film. One unused piece of footage he described featured Divine having a liaison with an underage boy in a dumpster that even Waters thought was too extreme for the movie. Too extreme for that movie?

It was a magical afternoon. See the monitor in the background behind us? That’s a shot of Divine walking to the market where she’ll shoplift a steak and “keep it warm in her own little oven.” And see how he signed my book. That’s class.

Just a couple of weeks ago I attended his art exhibit at the Gagosian Gallery in Beverly Hills — “John Waters: Rear Projection.” It was a clever and hilarious collection of mounted movie frame blow-ups, sculptures and other ephemera made special the John Waters way. The title piece is a series of frames into which giant pictures of derrieres have been superimposed behind the actors.

Another item, “Children Who Smoke,” puts cigarettes into the mouths of child actors from the past. A large sculpture of Tina Turner dangling from the controlling strings of puppetmaster Ike was also impressive. My favorite, though, was a series of frame blow-ups of actresses Bette Davis, Lana Turner and Joan Crawford behind the wheels of stage cars during hilarious, rear-projection cinematic wrecks. As the collisions occur, the actresses’ faces spin in silent, lipstick-slathered, open-mouthed screams. Mr. Waters, you’re a genius.

I recently caught a broadcast of his one-man show, This Filthy World, on Showtime. In it, he speaks affectionately about his beloved Divine and the rest of the Dreamlanders — David Lochary, Mink, Edith Massey, Mary Vivian Pearce, Cookie Mueller… He projects such a boyish enthusiasm and delight, even when discussing such potentially off-putting topics as coprophragia and bestiality.

It’s a healthy attitude to have. Hell, the world is always going to be full of sick shit. You might as well celebrate it!

For that, Mr. Waters, for the distinctive point of view you’ve allowed me to share with you, and for all the big, big laughs you’ve given me throughout the years, I thank you.

Saturday Retro Cult Review: ‘The Night Evelyn Came out of the Grave’