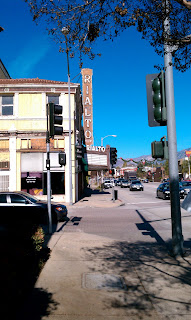 This Rialto Theater story memory is reprinted and augmented from my Weird Movie Village blog, circa 2010.

In October I did a post about the New Beverly Cinema and reminisced about other Los Angeles revival theaters that have faded into history. This past Monday, I was meeting a friend in South Pasadena for lunch, so I took a quick stroll down Fair Oaks Avenue to look at what was left of the Rialto Theater.

As I approached, I was saddened to see what an empty shell it had become. Posters for Rob Zombie’s Halloween and Grindhouse still hung in the glass frames outside (I guess they had special screenings there). And then I saw the dreaded red tag on the door — “unsafe for habitation.” Fortunately, since it’s on the national Register of Historic Places, it won’t be demolished, but it really needs an angel to provide the funding needed to restore it.

South Pasadena is a classic American small town, and when you take a walk down Fair Oaks, you’re really taking a trip back in time. I can’t believe that such a neighborhood would be unable to support a single-screen showplace like the Rialto. 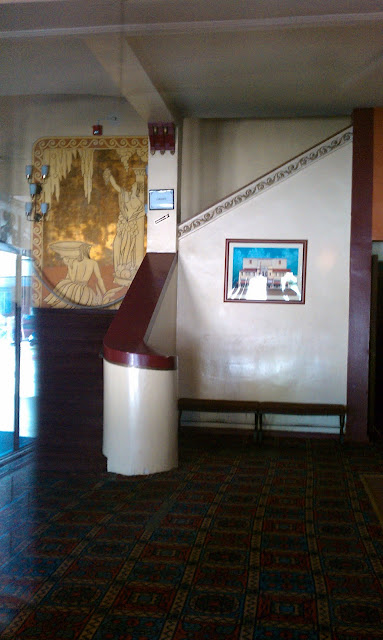 I took these pictures with my camera phone. Man, talk about your Last Picture Show. The photo on the right shows a portion of the lobby, providing a glimpse of the art deco magnificence of the auditorium. It’s got an orchestra pit, a balcony and one of those swooningly elaborate ceilings that hearken back to a time when “going to the pictures” was truly an event.

But I had so many great times there in the ’80s when it became a revival and art house. I remember going to a double feature of 2001: A Space Odyssey (in 35mm) and Silent Running (in 16mm). For the smaller format, they had to position a couple of freestanding school-style projectors in the balcony. And when they screened a double feature of Lynch’s Eraserhead with Romero’s classic Night of the Living Dead, the projectionist flipped the audio over to faux-surround sound immediately during Judy’s brutal trowel-stabbing of her mother for extra goriness.

I also saw Henenlotter’s Frankenhooker there at a midnight show for the first time as well as Gabriel Axel’s magnificent Babette’s Feast and Lindsay Anderson’s The Whales of August. Speaking of swan songs, this was the legendary Lillian Gish’s last film, and co-star Bette Davis followed soon behind her. Living in Sherman Oaks, which was just on the other side of the mountain from Beverly Hills, going to the Rialto and its little town truly was a comfortable journey back in time.

And the ancient Pasadena Freeway was hilariously horrifying. After driving 60 miles per hour, you’d reach your destination and discover that you had to instantly reduce your speed to ten miles per hour to manage the 90-degree off-ramp. Laurel and Hardy, indeed!

The last time I went to the Rialto must have been back in the early ’90s. I still remember how they’d ceremoniously open the stage curtains at the beginning of the program. Now that’s showmanship! Do movie theaters even have curtains anymore? But even back then, they’d have to close off the balcony because it was too much of an insurance risk. Earthquakes, you know.

Ghosts supposedly haunt the Rialto, too. Stories abound that a girl slit her wrists in the bathroom, then made her way to the balcony to bleed to death; a man went insane in the projection booth (he must’ve been running Wings of Desire); and that there’s even a phantom cat roaming the aisles!

Man, I miss that theater.