Great performances can be found in the strangest places. Here’s a look at three of them from the musical, comedy and horror genres.

In Grease (1978), the high school musical with the oldest students in film history, Channing was the most senior in the cast at age 33. Nevertheless, her Betty Rizzo is the liveliest, most fully-formed character in the film, especially when compared to the less-experienced Olivia Newton-John’s rather wooden performance. Ah, she was too pure to be pink.

Lusty and free-spirited, Rizzo represented rock ‘n roll in a 1950s postwar world that was still white bread and Pat Boone. When Danny Zucco (John Travolta) tells her to bite the weenie, she replies, “With relish,” and the deliciously nasty tongue she sticks out says it all. Most of the characters in Grease are cartoons — and they’re meant to be — but Riz is a fully-realized character with recognizably human vulnerabilities.

Lines like “I’m gonna get my kicks while I’m still young enough to get ’em” are funny today for different reasons, but she throws herself so completely into the role that it’s irresistible. Who else could have pulled off the song “There Are Worse Things I Could Do” like Channing? Of course, in the ensuing decades, she’s conquered all media, winning Tonys, Emmys and SAG Awards, but she still speaks fondly about ol’ Riz. 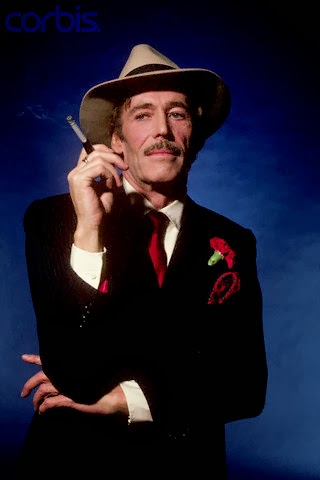 The late, great O’Toole appeared in some of film history’s most acclaimed films (Lawrence of Arabia, The Lion In Winter) as well as some real turkeys (Caligula, Troy), but my favorite O’Toole performance can be found in Richard Benjamin’s charming My Favorite Year (1982), a golden-hued tribute to the exciting early days of live television in New York.

Benjy Stone (Mark Linn-Baker) is an eager young pup getting his first big break as a junior writer for the King Kaiser Variety Show (a nod to Sid Caesar’s “Your Show of Shows”). He is thrilled to hear that his childhood idol, swashbuckling star Alan Swann (O’Toole) is announced to be the guest star on the following week’s show. They run footage from Swann’s films in the writer’s room, and as Benjy excitedly announces the titles of each clip (Captain from Tortuga!), the hilariously cynical head writer (Maude‘s Bill Macy) retorts: “Captain from Crap“!

But when Swann arrives completely plastered and immediately passes out on the writers’ table, Kaiser (Joe Bologna) is appalled and demands that he be replaced. Benjy pleads the formerly great star’s case, promising to serve as Swann’s babysitter day and night, assuring Kaiser that he’ll be sober and in top form for the show.

In a film full of wonderful performances (Baker, Bologna, Macy, Lainie Kazan), O’Toole pulls out all the stops with a character meant to be a parody of Errol Flynn — but it also mocks his own reputation as a hard-drinking gadabout. Memorable scenes include: Swann taking a horse for a joyride in Central Park; going to Brooklyn to meet Benjy’s family; and taking his bow after triumphantly overcoming his fear of performing on live television. And when he takes a secret trip to the suburbs to see his young daughter, but doesn’t even have the nerve to get out of the car when he sees her coming out of her house, it’s a wonderfully poignant moment.

O’Toole later played a wreck of himself again in 2006’s Venus. As faded actor Maurice Russell, his career is long over and he’s reduced to playing bit parts. When he describes playing a corpse in a television show to his still-beloved ex-wife (Vanessa Redgrave), she utters one word: “Typecasting!” as only Redgrave can.

One of the strangest actors in the business, Glover really brought it as the star of Willard (2003). As the socially inept, mother-dominated Willard Stiles, he only has a job because the manufacturing company his father built was taken over by Frank Martin (R. Lee Ermey) with the promise that Willard would remain employed.

At his creepy, rundown mansion awaits Mother — a hideous, needy crone (the one-of-a-kind Jackie Burroughs) who surely must’ve been what Norman Bates saw when he looked at his mother’s fossilized corpse in Psycho. Speaking of eccentric actors, she could definitelty give Glover a run for his money.

Mother orders Willard to set traps for the multitude of rats inhabiting their decaying mansion, but he  befriends and begins to train them instead. When Mom dies and Martin fires the hapless misfit, he sends his rodents out on a revenge mission.

Glover takes big chances with this role, pushing it to the absolute end — and his choices work. A couple of examples:

The morning after he’d sent his pals into Martin’s garage to chew through his expensive car’s tires and his boss storms into the office in a fury after having to take the subway, Willard opens his desk drawer to gaze affectionately at his beloved monster rat Socrates, closes his eyes and whispers “So good…so good.” And at his mother’s funeral, when he’s confronted by the family attorney who advises him to sell the house and start over, Glover goes completely bonkers, blubbering and shrieking, snot pouring out of his nose. “How can I start over?” he screams. “I’m practically done!” It’s really terrific.

Bruce Davison, who played Willard in the original, was blonde, tousle-haired and cherubic, which made his crossing over to the dark side even more shocking. Glover’s take on the character is straight out of the Addams Family, but his interpretation is abetted by solid support from the screenplay and art direction, as if time has been standing still in this particular place since the 1940s. Davison even has an amusing cameo as Willard’s late father as seen in portraits around the house.

Glover made a great music video to promote the film, performing a cover of Michael Jackson’s “Ben” with the horrifically gigantic rat that played Ben. I wonder if it got residuals.

Wild Times at the Convent