It should be pretty easy to make a horror film with a snake as the starring monster. Let’s face it — most people recoil when confronted by these reptiles. They’re leathery, slithering and cold-blooded, with forked tongues spiking in and out of their mouths… Oh wait — that’s Kris Jenner.

Snakes have figured in some of Weird Movie Village‘s faves, whether they’re the stars or merely supporting players. Ken Russell’s Lair of the White Worm stars the awesome Amanda Donohoe (in the above photo) as the slithering Lady Sylvia Marsh. The hilarious The Devil’s Nightmare features a cameo appearance by a snake whose hiss is dubbed by some guy who’s just saying, “Ahhhhh” into the microphone. Hammer’s The Gorgon depicts the titular character with a badly-animated head teeming with serpents in an otherwise fun film. And the internet is directly responsible for creating a snake movie — 2006’s Snakes on a Plane with Samuel L. Jackson.

In 1973, Zanuck/Brown Productions and Universal Pictures seemed to be testing the waters — ha! — for their later blockbuster Jaws, and the result was Sssssss, an old-school B-movie which, though released theatrically, was shot as a TV movie with a conservative budget, flat lighting and modest sets. It was released with another low-budgeter, the obscure The Boy Who Cried Werewolf, comprising one of the last double bills released by any major studio.

The incomparable Strother Martin (Cool Hand Luke) plays Dr. Carl Stoner, a herpetologist whose field of expertise is big venomous snakes. He’s looking for a college student to work for him as a part-time assistant, and David Blake (Battlestar Galactica‘s Dirk Benedict) applies for the job. Immediately, the good doctor starts David on a series of preventative immunizations that will help him to survive the bite of one of the venomous creatures in his lab. 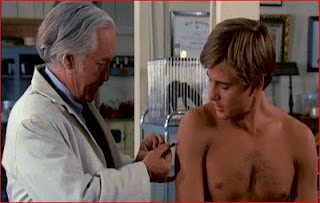 Surprise! The inoculations actually consist of a serum he’s synthesized to turn a man into a cobra. Stoner believes that humanity as a species has reached the end of the line, and the only way to survive is to evolve.

As the serum takes hold, David grows weaker and weaker and his skin peels off in sheets, much to the chagrin of Stoner’s daughter, Kristina (Heather Menzies). Now, Kristina has led a sheltered existence and tends to fall in love with the all of the young men Dad hires to work in the lab. Even though she doesn’t seem to be the sharpest knife in the drawer, she begins to suspect that he’s up to no good.

To get the dingdong out of the way during a key stage in David’s mutation, Dad sends Kristina to a nearby town to collect a rare urutu. On the way back, she stops off at a freak show where she recognizes a human/snake hybrid as one of Stoner’s previous assistants (and, of course, her previous lover). She races frantically back home to find Stoner dead in the yard and David, now fully transformed into a cobra, battling a mongoose.

Sssssss has aged well and is a lot of old-fashioned fun. It’s hilarious to see the naturally villainous Martin as the “good” doctor, especially because he hisses his lines even better than the snakes. But if he wanted the human race to survive, why didn’t he work on transforming it into a heartier breed, like a cockroach? Menzies, also in The Sound of Music and the fan favorite Piranha, comes off as a simp and is costumed to look so awful — with a ’70s mullet and John Lennon glasses — that it’s a wonder Benedict is so attracted to her. Maybe he’s just after Dad’s snake empire.

In keeping with the newly-liberated ’70s, Sssssss has some surprising male nudity (not frontal, of course) and some quaint but still-fun snake makeup. I have the 17-minute Universal 8 super 8mm digest of this film, and although it’s faded almost completely to pink, it’s still a hoot to watch.

The Svengoolie show on MeTV aired Sssssss and performed an inspired musical parody, “It’s in His Hiss.”

The animated GIF seen here features the film’s obnoxious bully and snake-killer, Steve, getting his just desserts. Steve is played by Reb Brown, noted for TV’s Captain America and films like Yor, Hunter of the Future and the MST3K favorite Space Mutiny.

The above line is actually one of the taglines for 1997’s Anaconda, and I’m sure it refers to the fact that the viewer will be unable to breathe due to laughing so hard. I was inspired by a review in the L.A. Weekly to actually fork out money to see this turkey, as it was guaranteed to be bad-movie gold. I was not disappointed.

They rescue the adventurer Paul Sarone (Jon Voight) from his sinking boat, and he offers to take them to the tribe in return for their help. Of course, his agenda turns out to be completely different — he’s actually a ruthless snake-hunter in search of the legendary giant anaconda, and he quickly commandeers the boat for his own purpose, which is to bring the snake back to civilization where, I guess, he can sell it for tons o’ dough. Just how he’s going to transport a 40-foot snake on a passenger barge is anyone’s guess, but that’s part of the absurdity that makes this movie a comic gem.

The whiter-than-white, blonde-haired Voight mugs shamelessly as the supposedly Paraguayan Sarone, delivering his lines with an Inigo Montoya-style accent. Imagine hearing this hambone’s description of the snake as “zee perfect killing machine. … Eet strikes, wraps around you, holds you tighter than jore true love. And joo get the privilege of hearing jore bones break before zee power of dere embrace causes jore veins to explode.”

His pivotal scene arrives when — after he’s been swallowed by the anaconda — he’s vomited back out again and, covered in snake snot, winks at the crew! Guess the snake couldn’t swallow his performance either.

Lopez, who made this film before her breakout role in Selena, is — not surprisingly — rather stiff in the role, although the writers try to help her out with some howlers. Referring to the documentary she’s working on, she says “I thought this movie would be my first big break. Instead, it’s turned into a disaster.” Plus, when she’s confronted by a real, scary, man-eating snake instead of some boring old Amazonian tribe, she has her crew put the cameras away and stop filming! 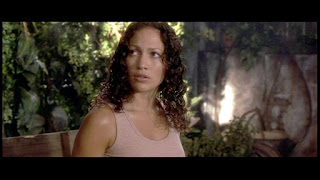 Stoltz has the good sense to be bitten by a tropical insect early in the film and spends most of the running time below deck in a coma. Ice Cube plays Ice Cube, and Wilson, for whom this was an early role, does his “aw, shucks” routine until it’s time to be eaten by the snake.

Speaking of the snake, the special effects are hilarious. The giant reptile tools along like a freight train — and it screams. And there’s a scene in which it hangs from a tree and uncoils to catch a falling victim, only to spring back up again, Looney Toons-style. It’s reported that the serpent effects cost a buttload of money but that doesn’t keep them from being silly, especially an interior view of Voight being trundled into the anaconda’s gullet.

There have been several direct-to-oblivion sequels to Anaconda, some featuring David Hasselhoff! I haven’t watched any of them. Does anyone know if they’re as silly as the original — or are they even intended to be?

Universal Horror Classics: Comfort Food for the Senses (Part One)