It’s hard to believe that home video has been with us for almost 40 years. I still remember the magic of going into a store where you could “rent” a whole movie given to you on a tape about the size of an eight-track cartridge! Films I wanted to see (or see again) that never aired on cable, like Zombie, were available to take home and enjoy. So what if it was a pan-and-scan print, fuzzy and green? I still got my zombie fix.

In Los Angeles there are still a few independent video stores with VHS tapes available (Eddie Brandt’s Saturday Matinee is the most legendary), but DVD has pretty much pushed analog tape off the face of the earth. I find it pleasant to go into the stores that still carry tape, stroll the horror aisle and take a trip down memory lane as I gaze at the obscure, strange or cheesy packaging from defunct companies like Genesis, Media, Wizard and Magnum, to name just a few. Sometimes I still rent ’em; there’s something comforting and homey about the fuzzy prints and worn-out video in this day of crystal-clear DVD.

Since the home video revolution came so quickly after my stint working at the drive-in theater, it was like a continuation of the experience for me. Not only could I revisit old favorites like The Silent Scream with Barbara Steele and Ralph Bakshi’s Fritz the Cat, I could also explore new avenues of entertainment. Each box (usually oversized; it was the independent releasing company’s marketing gimmick), regardless of the quality of the art on the outside, held the promise of something weird and wonderful. 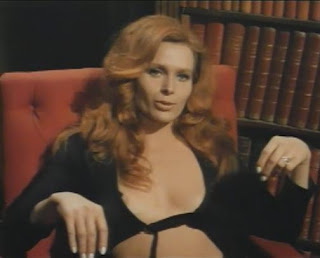 On the other hand, the pleasant surprises were frequent. For example, The Devil’s Nightmare, a bizarre French-Belgian-Swiss-Italian co-production, featured Italian horror hottie Erika Blanc as a vengeful succubus terrorizing visitors at a creepy castle. In one scene, a woman relaxes on a bed after some lesbian action (a requirement in films of this type and vintage).

The succubus (who can appear lovely, as Erika is seen here) turns into a pasty white, greasy-faced spectre with crazy eyes and supernatural powers. In the yard outside the bedroom, she transforms a stick into a snake (don’t ask) and it crawls through the window to get at the sapphic lover. What makes the scene especially hilarious is the dubbing. The hissing of the snake is just some guy saying “ah-h-h-h-h” into a microphone, and when the woman screams at the sight of the reptile, her voice is about two octaves lower than you’d expect.

And obscure American product like The Toolbox Murders (which actually played the drive-in I worked at) features Cameron Mitchell at his most over-the-top, kidnapping a young girl (Charlie Brown Christmas alum Pamelyn Ferdin) and murdering women in his apartment complex with various implements. The film has an overwhelming degree of sleaze that makes for some disturbing viewing.

When I met Pamelyn at a collectors’ show some years back, she had no stills from this film to autograph. I encouraged her to start offering them as there were collectors out there who would really appreciate them. Next time I saw her, there they were! I think she was originally embarrassed by the film, but decided to embrace it in all its greasiness.

For better or for worse, home video was also the only way to experience films off the beaten path or too strong for the drive-in, if you weren’t lucky enough to live near 42nd Street in the 1970s. Italian cannibal films were always a challenge. You knew you were going to 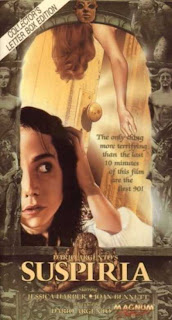 see rubber gut munching and staged mayhem, but you also knew the filmmakers were going to throw in scenes of real animal butchery, which were not only hard to watch but were always infuriating.

In 1989 Magnum Video did the world a favor by releasing Dario Argento’s previously unavailable Suspiria in multiple versions: R-rated fullscreen and letterboxed and unrated fullscreen and letterbox. I’d only seen 20th Century Fox’s R-rated release at the State-Lake Theatre in Chicago, so it was a revelation to finally watch it in all of its uncut glory. The film-to-video transfer for the time was truly extraordinary, with the wonderful, saturated three-strip color and that troublesome Technoscope. Great packaging art, too!

In the late 1980s I discovered a wonderful video company, still in operation, called Sinister Cinema. The company had a wide variety of economically-priced videos and it was with its help that my one-sided romance with Barbara Steele began. Quickly I snapped up Black Sunday, The Horror of Dr. Hichcock

and The Ghost. Sinister even had a series of Drive-In Double Features. For one low price, you got two films (often those that were originally booked together) with a generous selection of drive-in commercials between them. I’ve been buying from Sinister for over 30 years now! It’s a great resource for some really obscure product.

Well, the digital revolution has taken over. Soon physical recorded media of any kind will be extinct as on-demand libraries and PPV become more ubiquitous on cable and satellite. I sold my Beta on eBay after transferring the tapes to DVD, and my laser disc player and VHS are long gone. Still, it’s fun to watch the films I transferred to DVD from tape and enjoy the wonky sound, the fuzziness and the original openers…

Blast from the Past — Snake Movies to Hiss At