Today would be the 79th birthday of one of the most bizarre and beloved performers in the Hollywood firmament — the late Karen Black. Her career was emblematic of the changes that were rapidly taking place in the industry. She was in the rebel classic Five Easy Pieces with Dennis Hopper, but she also dived into a Movie of the Week, starring in Trilogy of Terror with that nasty Zuni Fetish Doll whom nobody can ever forget. Then she took off to Universal Pictures to make Airport 1975, the most hilarious installment of the progressively dodgy series. Yet it was all good. It’s what Karen did — and she did it so well.

She performed in everything from art films to low-budget sleaze and even made it to Broadway (Come Back to the Five and Dime, Jimmy Dean, Jimmy Dean). The important thing to remember is that she just kept working. No role was too big or small for her. Sometimes they were absurd, but sometimes they were glorious, and that’s how a cult legend is made.

I had the good fortune to meet her in person a couple of times and she was just as strange in person as you would expect.

Happy birthday, Karen. Here’s a reprint of my story from Weird Movie Village about her passing in 2013:

It was with a heavy heart that I heard of the passing of the ultra-idiosyncratic, independent-minded actor, singer and playwright Karen Black this week. From counterculture emblem to ’70s TV star and finally cult phenomenon, she had a truly remarkable career. Even when she was appearing in pretty miserable direct-to-video dross, she gave it her all. Sometimes too much — which is what made her so wonderful.

Karen had been in and out of my life since I was a teenager. She’s one of the reasons I started Weird Movie Village four years ago. I’ve seen her in concert, in plays, even at the grocery store. I participated in the crowd funding of her experimental cancer treatment, and I was thrilled to see the outpouring of support and love she received from her fans. I’m sure she was touched too. Unfortunately, she couldn’t gain back enough strength to make the arduous trip to Europe, and she lost her valiant battle on Thursday, August 8.

Born Karen Ziegler in Park Ridge, Illinois, she attended Northwestern University at age 15 (!) and left two years later. Show business beckoned — at 20 she appeared in a small role in future goremeister Herschell Gordon Lewis’ “The Prime Time.” In the late 1960s and early 70s, she was the toast of the independent film scene. She appeared in “Easy Rider,” “Five Easy Pieces” and “Portnoy’s Complaint,” which led to more mainstream roles in films like “Day of the Locust” (which she says sabotaged her A-list career) and “Airport 1975” (as the cross-eyed flight attendant who is forced to land the plane).

She made almost 200 movies, including Hitchcock’s last, “Family Plot.” She worked with Robert Altman in two of his best films, “Nashville” and “Come Back to the Five and Dime, Jimmy Dean, Jimmy Dean.” In the former, she showed off her singing abilities (and was nominated for a Grammy!) as Connie White, the second-tier country singer seeking to dethrone mentally collapsing superstar Barbara Jean (Ronee Blakley). 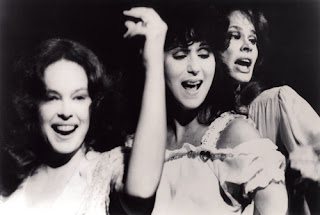 In the latter, a filmed version of the Broadway production that also starred Cher, Sandy Dennis and a career-beginning Kathy Bates, she played a transsexual who comes back to her tiny hometown in Texas to attend the reunion of the “Disciples of James Dean” and get closure with Dennis’ Mona, who’d given birth to his/her child but fantasizes that the boy was the byproduct of a one-night stand with James Dean while she served as an extra on “Giant,” filmed in Marfa, a few hundred miles from their dried-up, forgotten town. When Black’s Joanne forces Dennis’ Mona to admit that the boy, Jimmy Dean, is theirs, it’s a beautifully sad moment. Karen delivers big time, and Dennis also rises to the occasion.

Other career highlights include appearing with Bette Davis and Oliver Reed in “Burnt Offerings,” a 1976 Dan Curtis film that should’ve been so much better. She also costarred with Divine (in a rare out-of-drag role) in the sleazy and fun 1989 murder mystery “Out of the Dark.” She worked in movies by such diverse filmmakers as Henry Jaglom, Ruggero Deodato, Rob Zombie…the list goes on and on. And a band was named after her…The Voluptuous Horror of Karen Black. 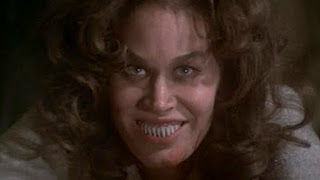 Even people who don’t recognize her name (for shame) have an “aha” moment when you mention the 1975 TV movie “Trilogy of Terror” and that damned Zuni fetish warrior doll. By the mid-1970s, she was bouncing between roles in mainstream U.S. television and often bizarre foreign and independent features, a pattern she would continue for the rest of her career, but it kept her working all the time. “Law and Order SVU”? Fine. “Plan 10 from Outer Space?” I’ll be there. She even has a film in post production as I write this. And, yes, it sounds really strange.

I first saw her in person in concert at the Hollywood Roosevelt Hotel in the late 1980s, performing an evening of some of her original songs mixed with standards. Her version of “Eleanor Rigby” was wild. If there are angels, there certainly must be crazy ones, and now she can join their choir. Here she is performing it in February of last year:

Anyhow, the Roosevelt show was supposed to open with her asleep in bed. The lights would rise, the bed would be wheeled out onto the stage, and she would sit up and begin to sing. The tech team blew the cues, though — the lights didn’t come up and she had to lay back down and start all over again. Cruel audience members came to jeer, which pissed me off, so I applauded as loud as I could to counteract their idiocy. I understood what she was doing — it was a Karen Black performance piece, strange and funny and beautiful.

She had an unusual singing voice. How can I best explain it? Let’s say she sang the way she lived; she allowed her octaves complete freedom to go wherever they wanted.

My next Black encounter was the Fangoria Weekend of Horrors when she was on a panel promoting “House of 1000 Corpses” with Bill Moseley, Sid Haig and director Rob Zombie. Zombie was still embroiled in a battle with Universal to release the film unrated rather than cutting it for an R. Everyone was having a good time talking about the making of the film, including Karen.

In 2004 I was shopping at my neighborhood Pavilions grocery store in Sherman Oaks. As I walked through the store, I was stunned to see someone who looked so much like her. I did a double-take and realized it was indeed her. Later, standing in line at the checkout, I saw her heading directly toward me, crossed eyes and all. My heart beat faster — was she going to say something significant to me? Alas, at the last moment, she turned her attention to the cashier and sharply inquired, “Where’s the aluminum foil?” Oh, well — at least I got my close-up.

Then, in 2007, I saw her in “The Missouri Waltz,” her play writing debut, a “drama with music” set in the 1970s about a young woman who returns to her family home, pregnant and unmarried and unsure what to do with the baby. She is guided by her two ghostly aunts (Black and Dana Peterson) who’d died in a car wreck a few years before and now haunt the house. Black wrote some good monologues but the second act collapses into a running-in-and-out-of-doors sequence. The songs by Harriett Schock were pretty poor, but Karen enthusiastically trilled them out with her free-range voice. 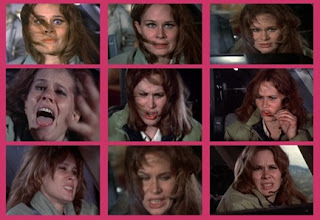 Next time you see that “Airport 1975” is coming on, set your DVR. It’s Karen at her best, being herself in a cheesy Hollywood disaster flick. Watch for the actor’s decision she makes to stick out her tongue when she’s trying to pull Charlton Heston by the legs into the cockpit from the hole in the ceiling. It’s genius.

And the other important Weird Movie Village denizen Linda Blair is in the film, too, playing the kid who needs a transplant and is serenaded by nun Helen Reddy!

Goodbye, Karen. You were enjoyed.