When I was in my early 20s, one of the first big jobs I lucked into in Los Angeles — courtesy of friends and connections — was a gig as the Director of Promotions for a television syndication company, Four Star International. I had no experience, just a rudimentary graphic design skill, the ability to compose a sentence, an interest in the entertainment industry and the abiding eagerness to learn that comes with being youthful and enthusiastic. 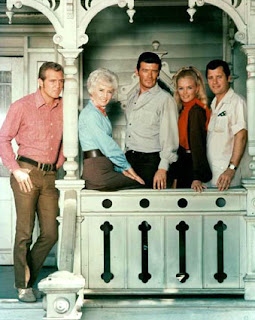 Four Star had been one of the power players of television production back in the late 1950s and early 1960s. If you look at program charts from the period, Four Star had at least one hit show on one of the networks every night of the week.

They were big ones, too: Wanted: Dead or Alive with Steve McQueen; The Big Valley with Barbara Stanwyck and Lee Majors, the first incarnation of The Smothers Brothers Show (not the variety program but a sitcom in which Tommy played Dick’s dead brother, returned to earth as a bumbling angel); and Burke’s Law with Gene Barry.

Burke’s Law spun off a short-lived female detective series, Honey West. It starred Anne Francis as Honey and John Ericson as her sidekick, Sam. It was cooler than cool, and it should have lasted longer, but it was killed by Gomer Pyle. Ye Gods.

Four Star had been formed by stars Dick Powell, David Niven, Charles Boyer and Ida Lupino in 1952, but by the time I arrived in 1984, the glimmer was all but gone. The company had just made a merger agreement with Gold Key Television, a super-cheesy syndicator of low-budget films like Plan 9 From Outer Space (and this was before it escalated into bad movie immortality).

When I started there, the old timers were just being phased out and packing up as the new breed was coming in. I remember having several conversations with a nice old gentleman named Joe Doyle who spoke with melancholy about the days gone by. He gave me a 16mm reel of naughty bloopers from one of their shows, Thrillseekers (Pillsneakers), which I wish I’d had the foresight to hang 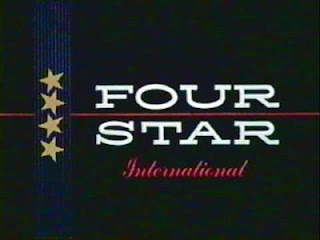 The Four Star offices were on Cole Avenue in Hollywood. It was a strange building that looked like a motel. Everything inside was from another era: the furniture, the paintings, the people. It was a real time warp. It’s like the company had been frozen in a particular year (probably when it was most successful in — oh, say 1962) and never evolved.

In 1984, there were still truly independent stations across the country, and syndication companies had to send their salespeople out to visit them individually to pitch shows. I would arm them with a presentation reel, sell sheets and media kits.

What we had for sale was pretty grim, though. No one would touch black and white, so all those wonderful Four Star shows (except for The Big Valley, which was in color) were untouchable. Plus, since they were all packed with big stars, the residuals we’d have to pay in order to air them made them cost-prohibitive.

And the Gold Key film library consisted of some of the cheesiest, most low-budget drive-in theater crap you’ve never heard of: ultra-obscure foreign sci-fi, drive-in epics from Crown International and a few art films thrown in for good measure. VCI Entertainment, our video licensing company even back then, still has a lot of them.

There were some gems. We had the 1951 version of A Christmas Carol, considered the very best adaptation of them all, but that was only one film and it was only marketable once a year. How could we salvage the company? Simple. Repackage the crappy movies as “cult classics,” develop new shows and colorize the old black and white ones. 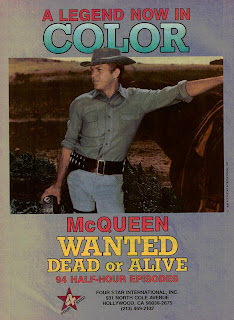 We chose Wanted: Dead or Alive as our first colorization experiment because Steve McQueen was — and is — a legend. Now, in my opinion, colorization was always a terrible idea, but very early experiments in the process were truly abysmal. The palette consisted of muddy browns and revolting greens — and backgrounds were still black and white, providing a surrealistic effect. Worst of all, the technicians made McQueen’s famous blue eyes…brown!

So we turned our attention to the Crown International library and put together a package of movies called “No Restrictions.” The gimmick was that stations could choose to order the films pre-edited, with the naughty bits removed, or they could get the complete R-rated versions and either air them uncut or do their own censoring.

It was an interesting concept, but a crappy movie is a crappy movie whether there are bare breasts in it or not. And the promo reel we sent out included a scene from a 1975 movie called Restless, in which Raquel Welch is having a very loud, very long, simulated orgasm. The salespeople said that when they ran the reel for prospective buyers, this scene was excruciatingly embarrassing for all involved and probably resulted in a lot of refusals. Next… 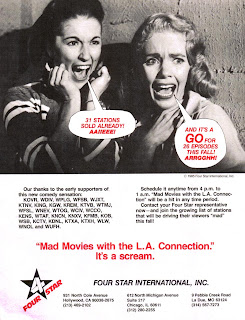 A comedy troupe in Los Angeles known as the L.A. Connection had begun to make a name for itself performing live soundtracks to bad films at local theaters like the Nuart long before Mystery Science Theatre came along, and we made a deal with them to produce a weekly syndicated series.

These young and eager kids (and they were kids) had carte blanche to conceptualize their own show, and the first pilot they produced was a testosterone-driven confection called Dungeon Women with the L.A. Connection. An attempt to incorporate the then-current sleazy mud wrestling craze, it featured pointy twin Judy Landers as one of two scantily-dressed bimbos wrestling around on a dirt floor and introducing redubbed clips from terrible movies.

It was a bit too far out, even by the excessive standards of the 1980s, so the show was retooled into a more subdued Mad Movies with the L.A. Connection, hosted by L.A. Connection founder Kent Skov.

It was funny, and we did sell it into the marketplace, but it only lasted one season. I don’t know why; I think its time just hadn’t yet arrived. Ironic television didn’t start being popular until the 90s. I’m even interviewed in a book about its history!

So what next? How about hiring Bill Armstrong, one of the original producers of Hollywood Squares and have him develop a new game show? He was a wonderful guy who could tell forty miles of blarney, but the result was Star Cluster, a variation of — you guessed it — Hollywood Squares. The concept was almost the same, except six, rather than nine, celebrities provided answers to personal questions and it was up to the contestants to choose one of three possible answers. And instead of linking them in Tic Tac Toe fashion, the players would attempt to form a “star cluster.”

We shot a week’s worth of pilots at KCOP-TV in Hollywood. What a cast of characters (including Linda Blair)! What a cheap set! It was a lot of fun, but stations saw it for what it was, an ever so thinly-disguised ripoff of Hollywood Squares. And since Squares was also available in first-run syndication (with Jon Davidson, not the later Whoopi version), buyers preferred to get the real thing.

In 1987, Four Star was purchased by Technicolor. We moved from our wonderful, funky old building in Hollywood into a cookie-cutter suite of offices in Burbank, and a new regime came in. My job wasn’t in danger, but the fun was gone. I decided it was time to move on, so I took a job as Director of Creative Services at J2 Communications, a company that’d made a name for itself as a producer and distributor of original home video entertainment, like Chef Paul Prudhomme’s Louisiana Kitchen and Dorf on Golf with Tim Conway. But that’s a story for another time.

Four Star managed to hang on until 1989, even producing a new version of another of Armstrong’s hits, Liar’s Club, before it was absorbed by New World Television and finally Twentieth Television. I wonder where that wonderful library of programming is now. And I wonder if there’s still a bunch of my old brochures and media kits stashed away in storage somewhere. The legend lives!

David Cronenberg and the New Flesh