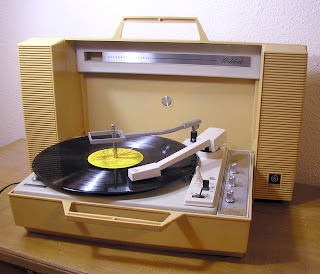 I’ve always been fascinated by home entertainment media. When I was about six years old, I noticed that the rotating nail buffing wheel on my Mom’s hair dryer could double as a record turntable, so with the aid of a sewing needle and a piece of notebook paper rolled up into the shape of a gramophone horn, I converted it. I taped the needle to the bottom of the cone, centered a record on the wheel and—hey presto—I got sound! Of course, it was playing at the wrong speed, but it worked. Thus began a lifelong fascination with such devices.

My parents indulged my obsession, so my childhood was filled with a variety of entertainment formats — record players, tape recorders, movie projectors — all of which held an endless fascination for me. When my sisters and I would accompany our parents on a visit to their friends’ homes, I’d always make a beeline to whatever type of home entertainment item they might possess.

Not a regular old television, of course. It had to be something more exotic — a Gramophone with a horn, for example, a wire recorder or a really tricked-out console stereo (one of those models with a turntable, a radio and a reel-to-reel tape deck built in). One of my Dad’s friends even had a 16mm projector, and he showed us a Boston Blackie movie. And at school there were educational films and filmstrips to examine, although I never became an A/V geek (surprise!). 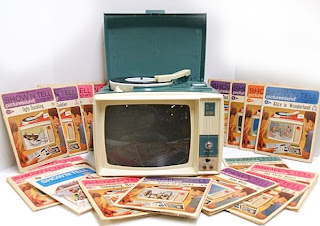 My best friend Mark got a Show ‘N Tell machine one Christmas. It looked like a TV set with a record player on top. You’d push a cardboard stick containing about 15 slide frames into the viewer and start playing the record, and the filmstrip would advance automatically to keep the visuals going with the story.

My Christmas gift was better — a Kenner Easy Show 8mm projector, which thrilled me to no end. I could go into the bathroom (the darkest room in the house) and hand-crank the little cartridges containing two-minute films onto the shower tiles! I loved it — Mighty Mouse flying…Popeye eating Spinach. I especially liked the Popeye film because I could run it in reverse when he ate and make it look like he was vomiting. Hey, kids are easily entertained. 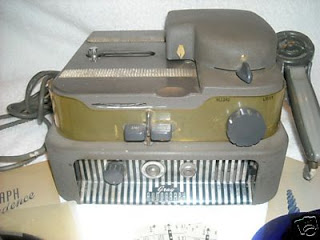 Not a real home entertainment format, but fascinating nevertheless was the Gray Audograph dictation machine Dad brought home from work for me. I guess they were phasing them out, because this was a real old-timer even back then. It was a huge metal machine with a giant microphone and flexible blue blank records.

You’d put a record on the turntable and speak into the microphone as the stylus cut a groove into its surface. Then, when you were done, you’d reset the machine and play it back. Man, I wish I’d saved it — or even a cassette from one of my tape recorders. There are plenty of pictures and silent movies of me as a kid, but no recording of my voice. That’d be a trip to hear.

My grandfather (“Boppy“) was big on photography, so he’d always have a show in his garage at the conclusion of one of his regular family cookouts, when it got dark enough. The slide shows weren’t so interesting to me, but then he’d set up the really magical device — the 8mm projector — and run home movies. Again, the footage of the family bored me, but he’d start each show with cartoons and other short films that he’d purchased at Kmart when he picked up his developed reels. 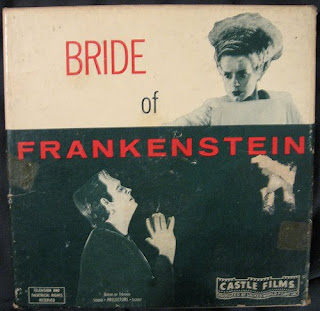 As I discussed in an earlier post, I was dying to get the new automatic version of the Give-A-Show projector and my Dad did it one better. In a true Red Ryder carbine action rifle moment, he gifted me with a real 8mm projector, complete with films that I could project to my heart’s content.

I still remember the first titles — Bride of Frankenstein, Creature from the Black Lagoon and Return of Dracula. Of course, the excitement of watching three or twelve-minute silent, black-and-white movies got boring, and I lost interest in the format for a while until I discovered super 8mm sound. I begged my Dad to get me a sound projector, even though it was pretty pricey.

Sound films were expensive, too—about $30 for an eight-minute 200′ reel and $60 for a 16-minute, 400′ reel. Nevertheless, I scraped together the money I could get to buy the sound version of Bride of Frankenstein; 16-minute condensations of The Omen and The Birds; and public domain Warner Bros. cartoons, to name just a few. Of course, feature-length films were available in the format, too, but they were really expensive — up to $300. Undaunted, I managed to obtain a print of Night of the Living Dead when I was 18 years old. I still have it.

After I moved to Los Angeles (with my super 8mm equipment in tow), the home video revolution began. Shopping for home video formats at the May Company department store in the Sherman Oaks Galleria, I skipped past the VHS and Beta machines and headed straight for the RCA CED videodisc system.

The discs were literally vinyl records encased in caddies that the machine would play like a record. And yes, they would skip just like a record. Why, you may ask, would I choose a format that couldn’t record, skipped, and had a chintzy loading system? Well, it was cheaper than videotape and some of the discs were available in stereo, and tape was still mono, unless you count the limited-availability VHS linear stereo, which sounded horrible. CEDs also offered a slightly better picture than VHS (but not as good as Beta, which I got into shortly thereafter). 8mm video, laserdisc and — finally — VHS followed. 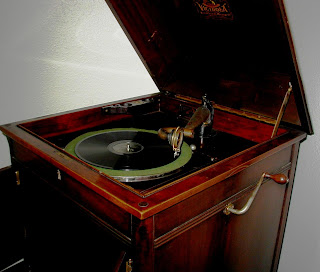 Now that we’re well and truly in the digital age, I still treasure and watch my super 8mm films. As a matter of fact, my collection has expanded considerably, thanks to eBay and distributors like the much-missed English-based Derann Films.

I never got into super 8mm widescreen, but I do have a few stereo prints that sound great. I also have a Victrola, an old-school school record player and a laser videodisc player. Obsessed much? Ironically, although I utilize all the new technologies in my work and leisure, they’re just not as interesting to me as the old analogue formats.

I’m not alone. Other Boomers (and their kids) are fascinated, too. You can find everything I’ve described on eBay. Hell, there’s even an Audograph Facebook fan page!