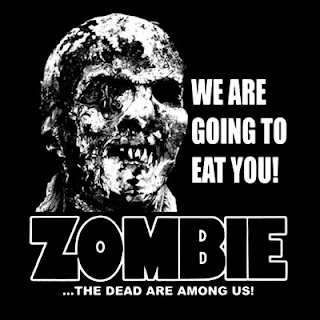 About a year after Romero’s epoch-making Dawn of the Dead (1978) blew my mind, another kind of zombie film arrived at the good ol‘ Niles 31 Drive-In theater where I worked as a popcorn-pusher. Despite a cast led by Anglos Richard Johnson (The Haunting) and Mia Farrow’s kinda sorta lookalike sister Tisa (Anthropophagus), I could still tell that Zombie was going to be a spaghetti splatterer.

It reminded me more of Jorge Grau’s Spanish Don’t Open the Window (aka The Living Dead at Manchester Morgue) than its American counterparts. It also delivered gore galore, featured an underwater zombie eating a shark, and placed a previously unrecognized director (in America, anyway) on the road to splatter stardom.

Back then, the Italians were always quick to cash in on popular American sci-fi/horror films by lensing quickie remakes. Since they were cheap as hell to book, most of them immediately made their way to grindhouses in the U.S. under various titles. Alien became Alien Contamination; The Exorcist inspired Beyond the Door, Eerie Midnight Horror Show (gee, what’s that supposed to remind you of?), and my favorite knockoff, The Tempter aka The Antichrist. Zombie is actually known as Zombi II in Italy, because Dawn of the Dead was entitled Zombi and was specially recut for Italian audiences by producer Dario Argento.

It played at the Niles 31 for weeks and weeks, bouncing between the two (?) screens. Nightly, I heard patrons screaming and — unfortunately — I had to clean up evidence of their more visceral reactions. It was in the men’s room, though! Guys would bring their girlfriends to the film in the hope that it would scare the females into their arms, but the jocks ended up bowing to the porcelain throne. Nyuk!

Anyhow, Fulci started as a workaday director who helmed films in all kinds of genres from the ’50s to the ’70s: spy movies, spaghetti westerns and giallos. He even made a comedy called The Maniacs with the splendid Barbara Steele!

Some of Fulci’s pre-Zombie pics have violent scenes that telegraph his later obsessions. A nasty sequence with a character falling off a cliff, featuring close-ups of his face being torn away by rocks…again and again and again…was repeated in two of his films, and eye impalement also figures in two others.

A couple of his notable earlier films:

Don’t Torture the Duckling (1972) tells the story of a small village torn apart by a rash of child murders. I think it’s actually his best, most virulently anti-religion and most personal film (first cliff face-ripping).

Lizard in a Woman’s Skin (1971) is a giallo made to cash in Argento’s Bird with the Crystal Plumage (1969) whose most notable aspect is a graphic scene of vivisected dogs that was deemed so realistic that Fulci and his special effects director, Carlo Rambaldi (E.T.), had to go to court to prove that they were fake. Then he was hired to do a cannibal zombie film to cash in on the success of Dawn of the Dead, and the rest is history.

Zombie hit me like a ton of bricks. Sure, Dawn was graphic and extreme, but the zombies were obviously reg’lar people with purple makeup and there was something pink and artificial about the entrails on display. Zombie, on the other hand, projected a disturbing sense of disease and decay that even hilarious dubbing can’t completely eliminate. One character pronounces the word Conquistadore as “Con-quee–sta–dor–ay” numerous times, but when one of them rises up out of the ground with worms dangling from his eye socket and rips out a girl’s throat, the laughs sort of dwindle down.

Man—these zombies are a mess. Shuffling, taking their time, they seem to be oozing an infectious putrescence. And, boy, does Fulci (and his EFX guy, Gianetto DeRossi, who he would keep for the rest of his career) emphasize the rot.

The first zombie, found by unlucky NYPD patrolmen on a boat in the harbor of New York, bursts out of a hold filled with decayed food, decayed bodies and worms playing “Chopsticks” on the piano (yes, there’s a piano on the boat; it’s not the QEII either, just a regular four-person yacht). As the obese zom goes for a patrolman’s throat, the cop defensively rips at its face, only to pull away a handful of wormy goo.

Anne Bowles (Tisa Farrow) arrives on the scene, as the boat had belonged to her father, who’d been missing at sea for months. Reporter Peter West (Ian McCullough) pops up and together they hit the briny to retrace her father’s route. It leads them to an island called Matul.

Yes, it’s pronounced like “My tool.” I showed the DVD to a couple of friends one time, encouraging them to MST3K the film and work the name of the island into their comments as frequently and as obscenely as possible. Elise won.

Anyhow, Matul, which is larger than expected (HA!) is infected by a plague. All the recently dead have been popping up and running (well, shuffling) around town. The locals think it’s voodoo, but the veddy English Dr. Menard, who’s been using the island as his own personal concentration camp, complete with freaky experiments, knows better.

The aforementioned Richard Johnson, who was also the priest in Beyond the Door (link!), plays Dr. Menard in all of his sweat-popping glory. He knows the only way to stop the living dead is to shoot them in the head, which brings me to my only complaint about the gore effects. In his disgustingly filthy hospital (nicely realized), when the sheeted dead begin to rise, he plugs them in the head. But it looks like intestines instead of brains come bouncing out of the bullet wounds.

Anne and Peter, meanwhile, hitch a ride with two nautical free spirits, Brian and Susan, on their yacht to the island. You can tell they’re free spirits because Susan whips off her top and goes skin diving while Brian eats beef jerky and pays no attention. Peter leers and you can tell he is thinking about “Matul,” or his tool. Anne has decided that Peter is now her boyfriend (why?) and looks on angrily.

Everything takes a turn for the worse when Susan comes up out of the water and shiveringly declares that there’s “A man down there!” Now that’s pretty cool. This leads to an underwater attack by the living dead and Sushi with a shark.

I gotta say, even with the hilarious dubbing, Susan still manages to engender sympathy. When the aforementioned “con-quee–sta–dor–ay” rises up and rips out her throat, you feel bad.

Plus the actress portraying her (Auretta Gay) does a really good job of doing the “so scared you can’t move” expression. Sweating, sloe-eyed, she can only watch with a chilled passiveness as the huge monster rises up out of the ground and rips out her throat. Later, when she’s reanimated as a zom, she looks more sad than hungry as she lunges at Brian and tears into his esophagus. Of course, she must be killed again, and you feel really desolate.

Fabio Frizzi’s score (which grows in stature each year IMO) perfectly plays up the emotion. The “thump thump thump” march that Frizzi devised perfectly encapsulates the inexorable finality of what’s happening on the island. It’s great. By the way, for those familiar with the score, Frizzi did the “thump thump thump” sound by tapping on a microphone with his finger. So much for high tech.

Menard’s wife, Paola, played by the extremely exotic Olga Karlatos (who can be seen in such wildly varied films as Once Upon a Time in America and Purple Rain) has the best line. I encourage you to recreate it. Say the following as if you’ve got laryngitis but are being punched in the stomach every other word:

“You WON’T be HAPPY until I MEET one of your ZOMBIES!” 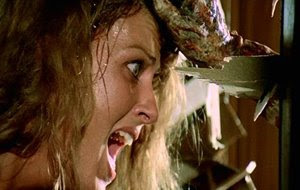 Congratulations. You read it just right. She ends up with one of her eyes (what color are they, anyhow?!?) impaled on a shard of wood in the most famous scene of the film, and later her abdomen is laid open for a zombie buffet. When Anne, Peter and grief-stricken Brian arrive at Menard’s house, they find a group of room-temperature types chowing down on Paola.

The camera slo-o-o-wly pans from revolted face to disgusted face. Hilariously, they all look like they’re going to barf. But they don’t move. I mean, its sickening, but wouldn’t the sight of the reanimated dead instill the “fight or flight” instinct in you, rather than a leisurely “I ate at Arby’s” reaction?

Of course, they all end up trapped in the nasty hospital to fight off the onslaught of active corpses. And, of course, there’s the de rigueur circular Neopolitan ending: Anne, Peter and Brian manage to escape back to New York, which is now overrun with the living dead: zombies are walking across the Brooklyn Bridge (doesn’t that happen everyday?).

I moved to Los Angeles from South Bend, Indiana, about six months later, with all my possessions in a Chevrolet Chevette with a hole in the floorboard, and was welcomed by the sight of hundreds of “We Are Going To Eat You!” posters all over Wilshire Boulevard featuring ol’ Wormy. I knew I was where I belonged. God bless you, Jerry Gross.