This is republishing of a post I originally wrote for Blogcritics in 2011. I updated some references, considering the changing of the times, but I still consider this a solid list of offbeat holiday fun.

There are horror films available for almost every holiday — Valentine’s Day, Mother’s Day, Halloween (of course) — even Independence Day (William Lustig’s Uncle Sam). With Christmas just around the corner, it got me to thinking about Yuletide-themed horror movies, and I came to the conclusion that most of them are pretty lame, but some are worth another visit whether they’re naughty or nice. 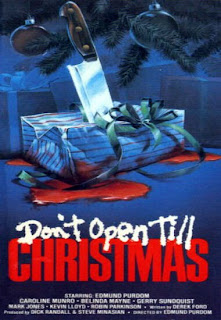 1. Don’t Open Till Christmas (1984). Actor Edmund Purdom took the directorial reins for this sleazy English slasher. Yeah, I know you’re saying “Edmund Purdom…who?” Well, he was in the original 1953 Titanic, made some sword and sandal epics and finally dived into sleaze classics like Frankenstein’s Castle of Freaks and Pieces, so he knew his way around the film world.

Here, he plays a police inspector on the hunt for a masked killer who is preying on men dressed as Santa Claus. You just know it’s going to turn out that the murderer was traumatized by someone dressed as Saint Nick as a young boy and is constantly seeking revenge.

Man, this film is cheap. Some of the sets are so small it looks like the actors are crouching to fit into the frame. And despite its 80s vintage, it has a distinctly sleazy 70s vibe, especially in its depiction of the Piccadilly Circus/nightclub milieu. Even cult vixen Caroline (Maniac) Munro, no stranger to sleaze herself, pops up to chirp a Eurotrash disco song.

And instead of being horrified by the murders, the obviously under-directed extras react with expressions of nausea or vague disappointment. It’s probably the best of the bad Christmas horror films, because it delivers the gore with a thick slice of cheese.

Father Christmases are offed in a variety of amusing ways: burning, bludgeoning — even exsanguination via castration. Of course none of it is convincing, but that only adds to the fun. You have to wonder what Purdom was thinking as he was performing double duty here: “At last! An opportunity to stretch my talent” or “God, I need the money”? And the VHS sleeve (pictured here) was classic. How could you resist renting it with packaging like this? 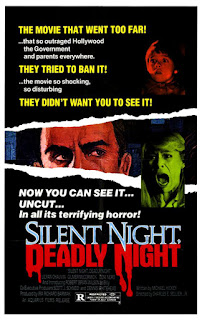 2. Silent Night, Deadly Night (1984). Three years ago, I had the opportunity to revisit this trash classic in 35mm with my nephew and brother-in-law at the Alamo Drafthouse, and we laughed and laughed.

Anyhow, the tormented teen goes on a killing spree after being abused by a nasty nun at the orphanage he was sent to after his parents’ deaths. Holiday cheer, decorations and those nonstop carols make him snap, and he just can’t stop chopping people with that axe. “Punish!”

I still remember when grim trailers for the film started playing on TV during the 1984 holiday season. All sorts of angry mothers’ groups got up in arms and demanded that the film be banned for all time, which created even greater publicity for the picture.

Silent Night spawned an outrageous number of direct-to-video sequels that diverted from the original story. Mickey Rooney showed up for number five as a nutjob toymaker named Joe Petto (insert groan here), even though he’d written a letter to the producers of the original complaining about the film back in ’84!

Guess he couldn’t resist that check for $2.95 they were waving in front of his nose.

3. The “And All Through the House” segment from Tales from the Crypt (1972). Joan Collins! Chloe Franks (Whoever Slew Auntie Roo, The House That Dripped Blood)! Sicko Santa! Need I say more? The first adaptation of the classic 1950s comic book series is by far the best.

I remember seeing it at the State Theater in South Bend, IN, on a double bill with another Amicus Films anthology, From Beyond the Grave. I didn’t dig Grave so much (insert second groan here) but Tales was great. It’s amazing that it got a PG rating back in the day, because it’s quite intense and bloody (even though the blood is pink).

Joan was in the horror/trash phase of her career at this point. She’d already done Inn of the Frightened People and I Don’t Want to Be Born aka The Devil Within Her, in which she gives birth to a baby possessed by a circus dwarf (I’m not kidding) still lay ahead.

Here, she plays a wife who decides to snuff her husband on Christmas Eve while her daughter (Franks) is upstairs, presumably having sugarplum dreams. Bashing hubby’s brains in with a fireplace poker, she throws his body down the basement steps to make it look as if he’d accidentally fallen. Unfortunately, a news report interrupts the nonstop Christmas music on the wireless to warn citizens to be on the lookout for a deranged Santa who had just escaped from the mental hospital.

What follows is a lot of suspenseful fun as Joan runs around making sure all of the windows and doors are secure as the psycho Father Christmas peeps in. It’s all for naught, however. Her daughter is too excited to stay asleep and comes into the living room, announcing: “Santa’s here, Mummy! I let him in!”

Joan rushes to the fireplace to grab her old reliable poker, but Santa already has his hands wrapped around her throat. Oliver MacGreevy, who plays the jolly old elf, should’ve won some sort of award for his performance. He effectively projected a perverted insanity that really creeped out my 13-year-old self and still does today.

I mean, after he killed Mommy, what do you think he did with the kid?

The story was redone for the HBO series of the same name, and although it ups the ante in the gore department, the original is still tops in my book. The 1970s English decor is painful, and the Pepto-Bismol colored blood is a hoot.

4. Christmas Evil (1980). John Waters is among the fans of this killer holiday flick, which stars Tony nominee Brandon Maggart as a schmuck who sees Santa performing an intimate act on his mother as a child. Instead of loathing the guy, he becomes his number one fan, keeping his apartment decorated year-round and sleeping in a Santa robe. But when too many people diss Christmas, he snaps and decides to become Kris Kringle himself — well, a murderous Kris Kringle.

All of this takes a lo-o-o-ong time. With apologies to Mr. Waters, I found this this to be a really boring movie. At 100 minutes, it moves at a snail’s pace and the killings don’t start until the final 40 minutes. And there’s weird, senseless stuff, too. He goes to the home of a bad boy who’d been looking at dirty magazines, but instead of killing him, he just covers his hands and face in mud and leaves impressions on the side of the house. Huh?

5. Black Christmas (1974). Long before he made the perennial 1982 charmer A Christmas Story, the late director Bob Clark plumbed darker Yuletide depths with this Canadian-lensed stalker.

A group of sorority girls staying at school over the holidays receive obscene phone calls. When one of them, Barb (Superman‘s Margot Kidder), provokes the caller, he threatens to kill her. He follows through with his threat, and soon most of the co-eds are being snuffed and stashed in the attic or basement.

The cast is interesting. Along with the aforementioned Kidder, who’s fun as the drunk, chain-smoking Barb, there’s also Olivia Hussey (Romeo and Juliet), Keir Dullea (2001: A Space Odyssey) and Andrea Martin (SCTV).

Although the killings aren’t really splattery, it does anticipate the slasher film boom of the 1980s, and the notion that the killer has been in the house the entire time dramatized a popular urban legend and gave birth to at least another film’s plot (When a Stranger Calls). It’s also very grim and nasty, with the killer’s phone calls being particularly graphic and obscenity-laden.

Black Christmas was pointlessly remade in 2006, and yet another revamp is coming next month in a PG-13 rendition. Yawn.

6. Silent Night, Bloody Night (1974). This is one of those movies you just want to be a whole lot better, since it’s practically an Andy Warhol Factory production. Directed by Theodore (Sugar Cookies) Gershuny, it stars cult favorite Mary Woronov (his spouse at the time) and horror vet John Carradine, with appearances by Warhol superstars Candy Darling, Jack Smith and Ondine.

With a cast like this, one really hopes it will take off into Paul Morrissey territory, but it’s awkward, dark and slow-moving. It has its enthusiastic adherents, but to me it just seems like a horror film made by experimental filmmakers with no affinity for the genre.

7. TV Christmas Episodes. Okay, they’re not horror films, but there are a few Christmas-themed TV episodes worth mentioning.

Oftentimes, Christmas has to be shoehorned into the plot of shows that don’t naturally lend themselves to holiday whimsy. I’m reminded of the Yuletide-themed Dragnet in which Gannon and Friday work to find a Baby Jesus statue and return it to its creche in a Mexican-American church in time for Christmas mass. Wanted: Dead or Alive, starring Steve McQueen, had a cheesy episode in which a kid gives him eight cents to find Santa Claus.

Far more successful were the comedies. Who could forget the Mary Tyler Moore Show episode in which Mary is scheduled to work alone at the news desk on Christmas Eve? She is freaked out that there may be an intruder in the building, only to be surprised by her coworkers with an impromptu party.

Married with Children did Christmas Bundy style with a plot that featured a skydiving Santa plummeting to his death in their backyard.

Like Silent Night, Deadly Night, it caused parents’ groups to get carried away, banning the episode from syndicated reruns until a compromise was reached. Even today, it’s prefaced with a “this is a work of fiction and none of this really happened” blah blah blah card.

Frankly, I think today’s kids are so tough and cynical that they’d look at it and say, “You mean there was a time when kids actually believed in Santa?” And they’ve already heard Justin Bieber’s duet with Mariah Carey on “All I Want for Christmas Is You,” so they’re scarred for life anyhow.

Well, as I said at the outset, most Christmas-themed horror films are pretty lousy, and that’s not even counting the biggest horror of them all, the 1978 Star Wars holiday special. I recommend the nonpareil 1951 version of A Christmas Carol starring Alastair Sim, which is…after all…a real horror story.

And to all a goodnight!