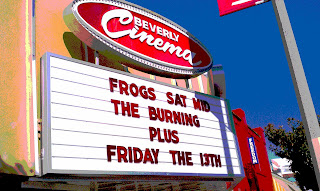 After writing the last post about Halloween movie suggestions (including Sleepaway Camp), I saw that the New Beverly was going to screen slashers The Burning and Friday the 13th on Saturday night. Of course, like Mr. Moviefone, I said, “I’m in!”

It’s so much more fun to watch the old classics (?) in a theater on real film with an actual audience than sitting at home.

The Burning (1981) used to be a real gray-market obscurity until it was released uncut by MGM on DVD in 2007.

The film has several points of interest. It features early roles for Jason Alexander and Holly Hunter. While he plays a sort of overgrown camper urging the others to have sex, she barely appears in the movie, mostly in crowd scenes cheering people on or cowering in fear.

Another noteworthy fact is that this is an early Miramax release — that’s right, Bob and Harvey Weinstein. It was filmed in upstate New York and, as with Sleepaway Camp, the accents really shine through, particularly in the case of the camp bully, Glazer (Larry Joshua), who sounds like he studied acting with the Bowery Boys. But Joshua went on to tons of film and television work, including—ironically—an episode of the Friday the 13th TV series.

The movie is also peculiar in that the campers and the counselors are all about the same age, so it’s hard to tell who’s who and why one is acting like an adult while another, who looks the same, is acting like a kid.

The Weinsteins obviously rushed it into production to capitalize on the success of previous year’s Friday the 13th, even securing the services of Tom Savini for the gore effects. It’s trashier than its predecessor, perhaps giving a nod to William Lustig’s ultra-sleazy, unrated Maniac (1980), which Savini also worked on. The print the New Beverly showed was faded, pink and was unfortunately missing the infamous raft murder scene, during which most of the surviving cast is memorably dispatched by the killer, which makes the rest of the film rather dull aside from the hilarious fashions, cheesy dialogue and Rick Wakeman’s often incongruous score.

The second film on the bill was a masterpiece in comparison—Sean Cunningham’s original Friday the 13th (1980). The New Beverly showed a print struck in 2008, so the colors were good, and it was fun to compare the assets of two low-budget slashers from the same era. Everything about Friday is superior: the acting (six degrees of Kevin Bacon), the cinematography and the music.

And while the characters in The Burning fade into generic obscurity, Friday brought us a horror icon: 1950s game show star Betsy Palmer’s Mrs. Voorhees, with her predatory mouthful of huge teeth and chant of “Kill ‘er, Mommy,” which was also repeated on Harry Manfredini’s ki–ki–ki ma-ma-ma- theme. And let’s face it—when Kevin Bacon gets the arrow skewered up through his throat, it’s a really nice effect, even after all these years.

I was working at the Niles 31 Drive-In Theater when the film was released, and we must’ve played it for at least a month on one of our two screens, whether it was the main, supporting or third feature.

The soundtrack was piped into the concession stand (where I served the popcorn), so consequently there are sounds and lines of dialogue that were burned into my brain and remain to this day, especially Manfredini’s music and Palmer’s “Why, I’m Mrs. Voorhees…an old friend of the Christies,” and “Look what you did to him!” And as with De Palma’s Carrie, it was fun to run outside at the right time to hear an entire parking lot full of moviegoers scream in unison.

Watching the film last night took me back to that era, and I was reminded of a couple of the murders that I always found funny. After having sex with Jack (Bacon), Marcie (Jeannine Taylor) goes to the use the facilities and—after doing a serviceable Katharine Hepburn impression in the mirror—sees the killer approaching with an axe.

But before she gets it in the noggin, there’s a quick shot of her visibly upset, with her eyes closed, looking more like she just got grounded by her father than that she’s about to get her face ventilated. And when Alice (Adrienne King) goes after Mrs. Voorhees with the machete to deal the final blow, the slo-mo shot of Palmer reacting in horror is priceless. I just wish the New Beverly had paired Friday with Sleepaway instead of Burning for a perfect camp double-feature.

Another semi-obscure killer camping movie—also filmed in New York—is Madman, whose only distinguishing feature is that it includes one of the few film appearance of Gaylen Ross (from Romero’s 1978 Dawn of the Dead). Like Candyman, the film’s killer appears when his name is called out, but it’s pretty much of a trudge through familiar territory.

There are only so many killer camp films one can devise a scenario for, so industrious filmmakers made college slashers (The House on Sorority Row), babysitter slashers (When a Stranger Calls)—even religious slashers (Alice, Sweet Alice). Probably the most controversial slasher film is 1984’s Silent Night, Deadly Night, which featured a psycho Santa and aired grim television spots during the holiday season, causing parents’ groups to go ballistic.

By 1986, the genre was pretty much washed-up, due both to a glut of copycat titles and censor backlash. The Fridays kept getting tamer and tamer until—like porn with the actual sex edited out—there was really no point to them. This paved the way for gentler stuff like Wes Craven’s yawn-worthy Scream series and the PG-13 “eek, I’m scared” movies of the 2000s. It was refreshing to see hard-core horror come roaring back with the likes of the Saw series, which would have been condemned back in the 1980s, but of course the inevitable glut of remakes came with it, some good, some execrable.

Alexandre Aja’s remake of Craven’s 1977 The Hills Have Eyes (2006) was actually a vast improvement. And Marcus Nispel’s take on Hooper’s classic 1974 The Texas Chain Saw Massacre (2003) was a well-judged, suspense-filled update.

How unpleasantly surprising it was, then, that Nispel’s reboot of Friday the 13th was so lame. He could have taken the plot of the original and gone practically anywhere with it. Instead, he piled on the drug-addled, oversexed teens, and turned Jason into more of a survivalist whose property was being trespassed upon. The gore wasn’t even very good.

Great Films About Childhood (from an Adult’s Perspective)

David Cronenberg and the New Flesh

The ‘Horror Hag’ Genre — Part One