Ever since theater has been around, there’s been horror. From Sophocles’ ancient Oedipus Rex to Shakespeare’s Titus Andronicus, audiences have always responded to grim subject matter — the gorier the better. Le Théâtre du Grand-Guignol was formed in Paris in the late 1890s to give audiences a glimpse of the horrific behavior of the city’s lower classes — prostitutes, thieves, street urchins and murderers. Featuring several short, violent plays at each performance, it became a source of pride on the part of the theater company to report how many people fainted each evening.

In 2012, I attended Urban Death, a performance art piece by the Zombie Joe Underground Theatre Company in North Hollywood, and I was suitably impressed. It’s probably the closest I’ll ever come to seeing live stage horror in the Grand Guignol tradition.

It was a refreshingly unique evening of theatrics — 42 vignettes in one hour, ranging from the splattery to the darkly humorous — that built up to an impressive intensity. A female patron sitting next to me actually starting whimpering! Now that’s showmanship.

One of the London-based Madame Tussaud’s Wax Museum’s earliest and most popular attractions is the Chamber of Horrors, in which visitors can gawk at famous murders and famous murderers, torture and execution devices. A 1936 film, Midnight at Madame Tussaud’s, is interesting for its location footage in the museum itself, but is 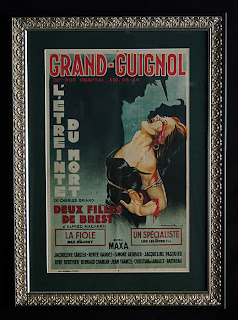 Another English notable is Tod Slaughter, a barnstorming actor whose full-blooded melodramas raised the hackles of audiences from the 1910s to the 1950s. His most famous role was Sweeney Todd, a character he played 2,000 times.

He staged his blood and thunder shows at the Elephant and Castle Theater in South London, at first for the locals but eventually attracting sophisticated audiences from the West End who came to see what all the fuss was about. Many of his most notable plays, including Todd, were made into films in the 30s and 40s.

Universal depicted a traveling sideshow in its 1944 monster rally House of Frankenstein, in which showman (and mad doctor) Boris Karloff displayed the bones of “Dracula — a real vampire!” to frighten his audience, and chambers of horror were featured in both Mystery of the Wax Museum (1933) and House of Wax (1953).

Mystery was filmed in primitive two-strip Technicolor (red and blue), but the limited color palette actually contributes to the creepy atmosphere. And, of course, House — with Vincent Price — was one of the most successful 3D movies released during the format’s first go-round. Both have scenes in which a wax figure is revealed to have a real corpse encased within.

I’m a fan of both versions, but I rather like Mystery with its contemporary (at the time) New York setting — and the scene in the morgue when the body suddenly sits bolt upright is still a shocker. And the figures in the museum are real actors — the primitive Technicolor lights were too hot for wax to hold up to, and it gives these scenes extra zing, because you sort of think that they’re moving just a little bit…but you’re not sure.

Chamber of Horrors is a 1966 made-for-TV film and a pilot for a proposed House of Wax series. Considered too intense (yeah, right) for broadcast, it was released theatrically with B-star cameos (Tony Curtis, Marie Windsor, Suzy Parker) and the added irritants of the “fear flasher” and the “horror horn” to indicate when something awful was about to happen, which pretty much renders it unwatchable. 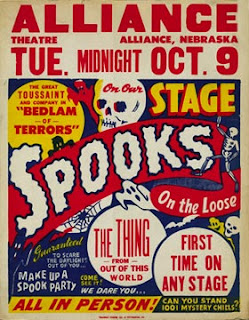 Starting in the 1930s, midnight Spook Shows became a regular feature in movie theaters across America. Typically they’d feature a headlining magician who’d haul out the old tricks like a seance, a floating cabinet and disembodied voices. As the years went on and the audience’s lust for bigger thrills increased, blood and sex were added to the mix, with simulated decapitations, killers running through the audience, ghosts floating on the ceiling and — in one instance — Lady Godiva and her horse materializing onstage!

I wish I’d had the opportunity to see one of these shows. They were probably hilarious hokey, but that can be fun. The advertising was outrageous — these guys could’ve given master showman Dave Friedman a run for his money. They promised so much on the program — including up to four complete feature films — you’d think the shows would’ve lasted until noon the next day.

Probably the biggest was Dr. Silkini’s Spook Show, originated in 1933 by Jack Baker. At one point he had seven Silkini units traveling around the country. He even managed to talk Universal Pictures into letting him depict the company’s monsters onstage, something that would never, ever happen today. When he died, Steve Conners bought the show from his widow in 1980. Conners managed to keep it going for a while (even bringing it to Hollywood in 1988, which I missed, dang it).

Something Weird Video has a great DVD called Monsters Crash the Pajama Party which features a full 45 minutes of great Spook Show commercials. And the title featurette is a hilarious piece of cheese that was actually shown in theaters with an emphasis on audience interaction. Here’s the trailer:

This year, Dr. Zomba’s Ghost Show of Terror was staged at the Hollywood Fringe. I interviewed David Lucarelli, the creator of the piece.

The “Godfather of Gore: himself, Herschell Gordon Lewis, got into the guignol game with The Wizard of Gore, one of his more splatterific films, about Montag the Magnificent, a magician who hypnotizes young women onstage and mutilates them in a series of “illusions,” only to have them literally fall apart later at home. It was remade in 2007 with Crispin Glover as Montag.

In 1976, Bloodsucking Freaks (whose plot is based on Wizard) was released by Troma Films, New York-based maker and distributor of low-budget schlock whose penchant for hucksterism rivals the Spook Show promoters. Freaks is set in a Grand Guignol nightclub run by Sardu and his dwarf assistant whose “models” are actual kidnap victims that they keep in cages and mutilate to the delight of their audiences. When the feminist group Women Against Pornography protested against the film’s release, Troma used the controversy to garner free promotion for it. 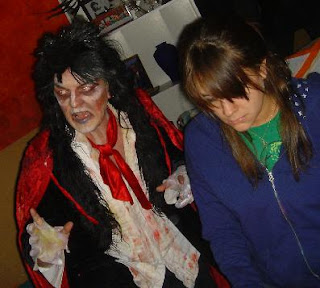 Hell Houses are the Christian fundamentalist answer to Grand Guignol. Around Halloween, all across the United States, these attractions pop up with graphic scenes to shock impressionable youngsters into accepting Christ, avoiding premarital sex, drugs and — gasp! — homosexuality. Of course, Jerry Falwell’s 1972 “Scaremare” was one of the first to arrive, but Colorado-based Keenan Roberts has made an entire industry of it, hawking Hell House Outreach kits online — only $299!

Of course, being an Angeleno, I attended a performance of Hollywood Hell House in 2007, which was staged in a two-level former Mexican restaurant on La Cienega Boulevard. It featured an extreme abortion scene, a Columbine-style massacre, a drug overdose and an AIDS patient. HHH was created by Maggie Rowe, a recovering Fundamentalist, who said that no exaggeration in the writing was necessary — the extreme material parodies itself. Now that’s really scary. Roberts himself came to the premiere, and thereafter added a “Maggie Rowe” character to his own production to demonstrate how “Satan does God’s work.”

The Hollywood version’s gimmick was “special guest Satans” appearing throughout the run. Check out this clip reel to see some of them, including Penn Jillette and Bill Maher, who some fundamentalists think is the Devil already…

Great Films About Childhood (from an Adult’s Perspective)