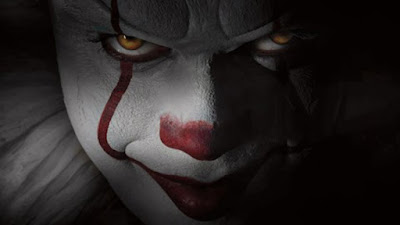 Based on Stephen King’s monolithic 1986 novel first adapted for television in 1990, the new big-screen production of It is a sensational film that blends supernatural horror with the real-life horrors of childhood.

The film opens with stuttering Bill (Midnight Special‘s Jaeden Lieberher) making a paper boat for his little brother Charlie (Jackson Robert Scott). Since Bill is sick, he stays home in bed while Charlie goes out to play in the rain. When the boat slips down a sewer drain, the child frantically tries to retrieve it, only to discover Pennywise (Hemlock Grove‘s Bill Skarsgård) lurking in the storm drain.
It’s a cracker of an opening scene. Pennywise, with his macabre clown make-up and preternaturally glowing eyes, alternately delights and frightens Charlie. And when those eyes change color and his jaws open to reveal row after row of terrifyingly sharp teeth, we know we’re going to be in for quite a ride.

Bill is heartbroken – and guilt-stricken – over his brother’s disappearance. Though his rather heartless father bluntly insists that Charlie is dead and that Bill should give up trying to find him, the determined teenager obsessively studies maps of the town’s sewer systems in the hopes of locating the boy. Gradually, he becomes part of a group of misfits who dub themselves “The Losers’ Club,” since they’re all ridiculed by the popular kids at their school.

Though these characters are initially sketched out in simplistic shorthand (the fat one, the promiscuous one, the germophobe, the black one, the Jewish one), the actors who inhabit them bring them to recognizable life. Aided by the snappy and surprisingly humorous script by Chase Palmer, Gary Dauberman, and Cary Fukunaga, their stories are as compelling as that of Pennywise and his assault on their town of Derry, Maine – and frequently more so. 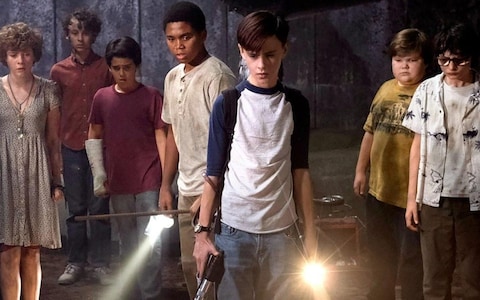 The kids’ summer vacation is anything but carefree as they confront not only the otherworldly horror of the demonic clown but also real-life assaults at the hands of some terrible parents and the sadistic town bully Henry Bowers (Nicholas Hamilton).

Set in 1989 instead of the book’s 1958, It shares thematic elements with the Netflix series Stranger Things, as well as one of the show’s actors, Finn Wolfhard. He plays Richie, the motormouth who can’t stop boasting about his obviously nonexistent sexual conquests. Among the others, Sophia Lillis is a real find as Beverly, who’d wrongly been branded the town slut by the mean girls at school. Her real-life horror is the sexual abuse by her awful father, something we’re spared a graphic depiction of.

Jeremy Ray Taylor is also striking as Ben, the chubby new kid who’d been doing research on the town and has started to uncover the secret of Pennywise. Jack Dylan Grazer brings welcome humor as the sickly Eddie, who has the ability to rattle off statistics about any kind of plague, virus, or disease at a moment’s notice. Chosen Jacobs’ Mike and Wyatt Oleff’s Stanley are also good as the “outsiders” — the black kid and the Jew living in the ever-so-white, Protestant Derry.

Skårsgard is a wonderfully perverse Pennywise. Comparisons to Tim Curry’s 1990 version will inevitably be drawn, but Skårsgard’s character has more of a cruel streak and insatiable bloodlust. His transformations, as well as the hellish lair he inhabits, are also more vividly drawn in this production. His performance is also enhanced by some well-chosen CGI.

The film concludes with the hopeful closing title It: Chapter One, leading viewers to believe that the filmmakers intend to add the part that takes place 27 years later, when the Losers reunite as adults to do battle with Pennywise once more. If It‘s box office delivers on industry estimates, the sequel will surely be money in the bank.