What makes a classic horror film? Craftsmanship, certainly, and especially repeatability — a film you want to watch again even though you’ve thoroughly memorized the moments of shock. Here are some classic horror films that have stood the test of time and are just as striking today as they were on their original release. 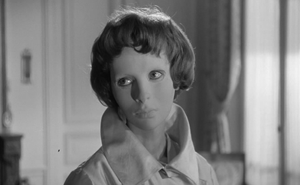 Les Yeux Sans Visage (Eyes Without A Face), from 1959, is French director Georges Franju’s masterpiece. A surgeon, Génessier, is obsessed with restoring the face of his daughter, Christine (Edith Scob), which had been horribly disfigured in a car accident. To achieve this, he recruits his devoted assistant, Louise (Alida Valli) to lure beautiful young women to his remote clinic where he experiments on them.

It’s a fairly straightforward plot, but what makes this film exceptional is Franju’s handling of the material. Hauntingly poetic and genuinely creepy, it really gets under your skin (pun intended). Christine wears a white porcelain mask to hide her disfigurement, and it makes her seem like a living statue. Dressed in stylish white gowns, she drifts through the house like a ghost. 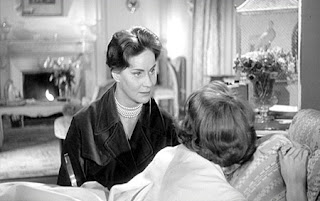 Génessier is so smug and self-involved that he doesn’t realize his skin graft experiments are in fact torturing Christine—not to mention the fate that befalls the numerous victims who are unlucky enough to find themselves under his scalpel. Louise is slavishly devoted to this bastard—she knows full well the women she brings to the clinic are going to die—and yet she keeps procuring more, defending the doctor’s work when Christine dares to complain.

Scob is remarkable in her role. We only see her face for perhaps three minutes in the entire film, yet she manages to convey a full range of emotions with her body language. Valli, of course, is terrific, and her Louise is a study in contradictions. Brasseur plays the arrogant doctor to the hilt, not in mad scientist mode, but with the self-assurance that comes from believing he’s always right. Christine is the only one with a conscience, preferring to die rather than continue suffering—and causing the suffering of others. 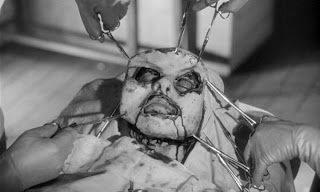 The most famous scene—the removal of a victim’s face for the graft—is still shocking today, because it’s done so clinically. There’s no sound except for the doctor’s breathing as he methodically cuts into the skin, carefully pulls up the edges and lifts it off. Even though I knew it was coming and had seen it before, when I watched this film in its 2003 theatrical re-release, I thought I was going to pass out during this scene!

The fleeting glimpses we get of Christine’s face are equally shocking. She slips into the room of one of her “donors,” and the disfigurement is seen, briefly and blurrily, but it’s enough. When a graft seems to be successful, she is elated with her restored beauty, but when it begins to fail, we’re subjected to a series of clinical still photographs documenting the skin literally rotting off her face accompanied by the doctor’s passionless reportage of the failure.

There are fairly straightforward scenes of police procedurals, but the images of Scob seemingly floating down hallways, and the leonine Valli driving through the streets of Paris in search of prey are oddly beautiful, surreal and absolutely unforgettable. Future Academy Award-winner Maurice Jarre provides the excellent score.

Terrence Rafferty, writing in The New York Times, said it best: “Eyes Without a Face is among the few films in the genre—Carl Dreyer’s Vampyr (1932) is the only other one I can think of—that holds our attention without any recourse to narrative suspense. We barely care how the story will turn out: the suspense is in the images themselves, in the tension generated by our attempt to resolve the contradictory emotions they arouse.”

Hard-working horror hack Jess Franco did a remake of sorts in 1987, Faceless. Relentlessly sleazy, it amps up the gore and is actually one of his more watchable efforts…which isn’t saying much. It also boasts (for Franco) an all-star cast: Helmut Berger, Telly Savalas, Anton Diffring, Stephane Audran (who gets a needle in the eye) and Caroline Munro! 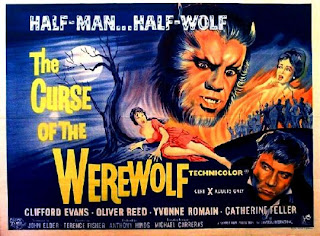 Curse of the Werewolf (1960) is one of my favorite Hammer films, along with Brides of Dracula, which I’ve discussed before. Featuring a star-making turn by a shockingly young Oliver Reed, it’s perverse, violent and has a lot more on its mind than just ripping throats.

A beggar (Richard Wordsworth) is thrown into a prison cell and left to rot by a sadistic Marques (Anthony Dawson). When his mute servant (Yvonne Romain) rebuffs his repulsive advances, she is put into the same cell and raped by the now-beastlike beggar. After escaping the cell and killing the Marques in revenge, she flees to the country and is taken in by the kindly Don Carledo (Clifford Evans) and Teresa (Hira Talfrey), his faithful servant.

When the girl dies in childbirth on Christmas Day, Don Carledo adopts the boy, naming him Leon, but superstitious Teresa fears that he is cursed. Sure enough, soon the little nipper is flashing his fangs and telling his father about his disturbing dreams of blood. Local farmers are up in arms about the “wolf” that is prowling the countryside and attacking their sheep. 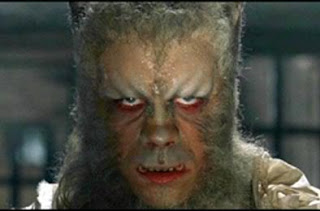 Leon grows to adulthood, and he moves to another town to take a job in a winery. There, he meets and falls in love with his employer’s daughter, Cristina (Catherine Feller), but when he is taken to a brothel by a well-meaning co-worker, the beast inside him is awakened and he goes on the rampage. He goes to the police, but they don’t believe him, so he turns to his father for help. Don Carledo realizes he must summon the strength to put his son out of his misery with a silver bullet.

Curse brings a number of new twists to the werewolf story. Rather than suffering a bite from another wolf-creature, Leon’s lycanthropy is truly a “curse,” having been born the bastard child of an insane man on Christmas Day. And the film explicitly links lycanthropy with puberty, as the young Leon is seen howling at the moon as hair sprouts on his body.

This is the Hammer factory in its prime. Excellent color cinematography, beautiful sets and crackerjack direction by the great Terence Fisher make this a film to savor again and again. The details are great—when the Marques calls the servant girl to his room for unsavory purposes, he is seen studying himself in the mirror and picking scabs off of his face. Behind the opening title sequence is a long-held close-up of Reed’s eyes darting, animal-like, back and forth. One could argue that the contact lenses he’s wearing are causing his eyes to well up with tears, but it really adds an extra dimension to the shot—this is not a happy monster.

Reed is so good as the suffering Leon. I don’t think his screen time even adds up to half of the film, but he’s in turns eloquent, pitiful and scary—all the right attributes for such a role. His werewolf makeup by the ever-reliable Roy Ashton is perfect, taking advantage of Reed’s already wolfish appearance. The supporting cast, including Wordsworth, Evans and Talfrey, also add to the persuasiveness of the story. And the story—written by producer Anthony Hinds under his John Elder pseudonym—is based on Guy Endore’s “The Werewolf of Paris” (switched to Spain because Hammer had the standing sets) and it has enough religious, psychological and sociological underpinnings to keep Freud busy for weeks. 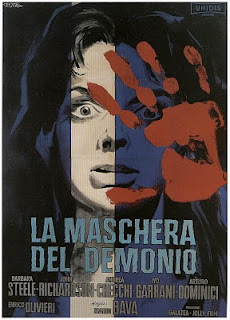 1960’s The Mask of Satan (aka Black Sunday) is the legendary Italian horror director Mario Bava’s finest film and the sensational Barbara Steele’s first venture into the genre. She plays a two roles she’d repeat several times with variations—Asa, a reincarnated, centuries-old witch and Katia, her innocent, virginal descendant.

When we first meet Asa she is being condemned to death for sorcery. Before she is burned at the stake, a spiked metal mask (the mask of Satan) is hammered into her flesh.

200 years later, Dr. Thomas Kruvajan (Andrea Checchi) and his assistant Dr. Andre Gorobec (John Richardson), are traveling through Moldavia to a medical conference when one of the wheels of their carriage breaks. While waiting for their coachman to fix it, they explore a nearby crypt and find Asa’s tomb. Kruvajan is curious about the mask he can see through a glass panel in the lid, and when he removes it from the corpse’s face, he accidentally cuts his hand. His blood drips on the exposed flesh, but they leave the crypt unaware that Asa is being restored to life. Outside, the doctors meet Katia. who lives with her father, Prince Vajda (Garrani), and brother Constantine (Enrico Oliveiri), in a nearby castle that the villagers all believe is haunted. Gorobec is smitten with her beauty.

Now revived, Asa telepathically contacts her henchman, Javuto (Arturo Dominici), who’d been executed along with her, and orders him to rise from his grave. She wants to drain the blood of her descendant, Katia, believing it will give her immortality. Javuto goes to the castle and vampirizes Kruvajan, kidnaps Katia and taking her to Asa. As the witch begins to drain away Katia’s life force, Gorobec arrives in time to save her and dispatch her malevolent ancestor. 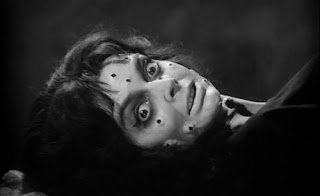 The devil is in the details with this film. The simple plot is merely a device upon which to hang a series of startling—and startlingly beautiful—images. When we (and the doctors) first meet Katia, she is dressed in a black coat, accompanied by a pair of large black dogs, standing against a dramatically clouded sky. It’s quite an entrance. As the mask is hammered onto Asa’s face, blood jets out—it’s still a startling scene. Asa’s resurrection is striking, too. When Kruvajan first pries the mask off of her face, her empty eye sockets stare up at him and a spider crawls out of one of them. Later, when his blood begins to resurrect her, eyeballs “regrow” in the sockets.

Javuto’s resurrection is also atmospheric. Revived but still unable to move, Asa commands him to return from his grave. The ground splits open and an alarming-looking, undead creature gropes his way out of the soil and pulls off his mask. Later, when Gorobec discovers that Kruvajan has become a vampire, he goes to the coffin where his former colleague now rests, accompanied by a local priest, who drives a wooden spike into the fiend’s eye in a scene that certainly must have inspired Lucio Fulci’s trademark eye-mayhem. 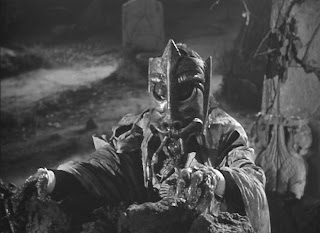 For years we Americans had to live with American International Pictures’ version of the film, heavily edited and re-scored by house composer Les Baxter. The first time I saw it was on VHS videocassette with a faded pan-and-scan print that did criminal things to the splendid black and white cinematography. And although it was a British print, it still had the more explicit scenes of violence excised.

Image Entertainment’s 1999 DVD release was a revelation. Not only was it restored to its widescreen monochrome glory, the mayhem was back. I knew what to expect—the old videotape was clumsily cut, but you could sort of tell what had happened. Not that Black Sunday is a splatterfest—the scenes are swift and unexpected, which makes them all the more shocking.

What makes this film a perennial is a handsome production, rapturously atmospheric settings, truly creepy sequences and the insanely gorgeous Steele, who was dubbed by one critic “the only actress whose eyebrows can snarl.”

The San Antonio Film Festival Is Online This Year