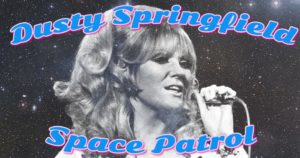 This is the latest play by William M. Razavi, author of The Bronson Pinchot Civil War Cupcake Experience and 27 Short Plays About Being Murdered in a Hotel by ABBA.

The crew of the Stella 5 is on a routine patrol along the orbital space fence when a stowaway throws everything into a crisis. The fact that the ship is haunted by the ghost of Dusty Springfield is the least of their worries now.

Performance Dates: The play itself will run June 8-30, 2018, with performances on Friday and Saturday nights and a couple of Sundays.

Looking for actors of any type, gender, age, etc.

Thrash Crankshaft is a serial radio play. Each weekend of the three-week run will be a new episode, and there will only be two to three days of rehearsal for each episode.  Each performance will be recorded and edited into a podcast to be distributed.

Thrash Crankshaft, PI is a three-episode Noir Surrealist Comedy Detective Serial Radio Play in which the gumshoe (Crankshaft, Thrash Crankshaft, PI) is hired to find the script to the show that he’s currently appearing in. Then it gets weird. Written by an author who was raised on Monty Python, The Goon Show, Firesign Theater, The Muppet Show and dozens of other subversively silly influences, this radio play guarantees thrills, adventure and the kind of stuff you can only do when all you have to do is make the things sound like they’re happening, so it’s affordable.

Rehearsal Dates: TBD. Assume two to three rehearsals the week of each episode. As this is a radio play, blocking and tech cues will be minimal.

Likely two to four people multi-cast to do as many voices as possible and fill out the crowd scenes.

Announcer: heard from at the beginning and end of each episode. Probably not involved in any of it otherwise. Thank god.

Miss China Dahl (aka ‘woman’ aka “good girl” aka ‘Good Girl’): Thrash’s client. Hires him to find the script to the show they’re all in. No-nonsense, may talk like they did in 30’s comedies (see: the ‘trans-Atlantic accent’). Joined at the back to sultry-voiced woman aka ‘bad girl’ aka ‘Bad Girl’). Rich. Like her parents. Allergic to corn nuts.

Channels aka Sergeant Brian Channels aka ‘man with really loud voice’): worked with Thrash on the police force. Has no inside voice. Loud. Really loud. Amazingly loud. Just. Loud. Damn.

Miss Bebe Dalh (aka dame aka ‘sultry voiced dame’ aka ‘bad girl’ and ‘Bad Girl’): wants Thrash to stop looking for the script. Rich. A voice seductive enough to make anything sound like innuendo. Joined at the back to miss china dalhl (aka “good girl’ aka ‘Good Girl’) . Not allergic to corn nuts. Has a team of hired gorillas.

Rocko: lead gorilla for ‘bad girl’. Is a gorilla. Makes gorilla noises. Has a hook for a left hand. Wears tuxedos.

Author: the guy who’s writing the script. In his own radio play. Yes. It’s complicated. Stop looking at me like that.

Foley Guy (aka ‘other voice’): probably our Foley artist. Is not prepared for improv.

Script Vendor: a vendor of scripts. Talks fast and shifty because they are selling bootleg scripts in an underground script exchange in an above-ground parking garage.

Chief: the chief of police. Sounds Irish. Has a disagreement with crankshaft over whether crankshaft should date his daughter. Punches crankshaft a lot.

Cop-Sounding Voice: some random cop used to further the script

Wino: every noir alley has one. Reserve yours today!

Skippy (aka ‘random guy’): a temp. Standing in for Marty who is called away in ep2. Can’t really play the saxophone. Plays a mean kazoo.

Special Talents we could use:

Cold Readings. Be ready to use more than one voice.

If you have any questions about this show or the auditions, please contact The Overtime Theater at theovertimetheater@gmail.com or by phone at (210) 557-7562. Leave a voice message and your call will be returned as soon as possible.

Interview: The Director and Leads of ‘Romeo and Juliet’ at the Classic Theatre

An Uninhibited ‘Quills’ at the Overtime Theater

The Public Theater of San Antonio

The Tobin Center for the Performing Arts